A room of one's own 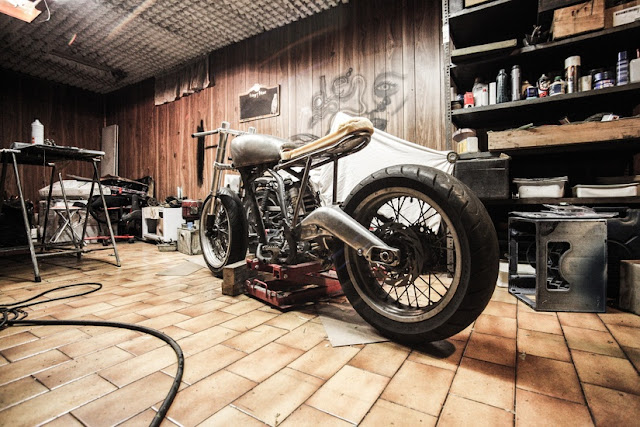 It's raining again. Raining like it has for days, raining and cool after the coldest winter this place has known. The dismal heaviness of the skies is only occasionally punctured by overheated blasts of nuclear light and suffocating humidity.

So I'm mostly inside or on my way to another inside, playing the wage slave, keeping a few different jobs stapled together in hopes of covering all the bills and so on. That's not really the inadequacy, although the situation has been and will likely continue to be marked by a certain meager sufficiency at best for the time being.

Actually, that contributes to the inadequacy, because it makes it that much harder to get what I really want.

No, more than want. What's the space between want and need? What's something that's more - much more - than just a casual desire, but maybe not an official existential necessity? How do we describe something whose absence is not necessarily a threat to continuing existence, but whose presence and availability would be such a profound contribution to emotional - psychic - well-being?

It's not about having a specific vehicle right now, some sort of tangible assembly of preferences and wishes. Those exist, but that's not the point. And the Passat is a perfectly acceptable machine in the absence of something more sublime, although I am constantly reminded of its position firmly within the paradigm of the modern car as comfort and convenience device that insulates and protects more than engages. But that's secondary, because this consideration is beyond that concern.

It's about having available space, a designated volume within which I can plan and act and consider, a construct that defines the ability to perform tasks as it protects the results of those tasks.

I want a garage.

That's the longing right now. That's the want. More than anything that would immediately go into it, I want a workspace and storage space.

Not having one in Astoria was understandable, part of the urban bargain at that point. They existed but were unreasonable on several fronts, and I took that as part of how it was. Here? Not so much. Or else something has been driving the longing for a project past previous rationalizations.

The project - a project, some kind of project - is the underlying primal concern. I need something specific to do, some sort of mechanical puzzle to ponder and solve, some manifestation of individual beliefs and conclusions rendered in steel and wiring and rubber to build. And I need a place to do it.

If you have a garage, you have space for things and processes. You have a place defined by activities and creations that can't really be done or kept in other places.

And this is not happening in the current situation, with an apartment two floors up from ground level and parking in the open-air building lot at $50 per month per space. Yes, I've heard about how someone rebuilt their Suzuki dirt bike or BMC A-Series motor in their kitchen blah blah not happening here. (Besides, I do like to cook and that requires space as well, and at least in this respect the current situation is a vast improvement over the small-craft galley I had back in Astoria.)

I've considered - am still considering - renting a space at some local self-storage lot, although anything large enough to hold even a motorcycle will run well over a hundred a month and require a dedicated drive out and back. Kills off the ability to do quick little things on impulse.

Even so, it's tempting. A project bike would be a great start: find a ratty CB360 or SR500 or something, strip it down, clean and tune and idealize and personalize until it's happy running around the hills and looks good enough to pitch to Bike EXIF.

Also, motorcycle ownership in general around here is largely predicated on the availability of storage during snow season, so there's that.

After that delusions of moderate grandeur set in, largely involving frames made of mild steel tubing and various components from terminal rust victims or local parts yards. All in good fun, all devoted to a deeply sort of soul-satisfying venture, all ambitions which are at least somewhat mindful of my limited circumstances which is part of the point of the whole homebuilt thing anyway.

And all of which needs space.

This is not about insisting on some idealized environment, some deluxe man-cave Garage Mahal. Actually, the less full of odious excess this whole concept is the better. This is simply about having a place to work, a place where I can tune and disassemble and paint and polish and fit and drain and replace and improve, a place where I can understand how to adjust a Weber carburetor and learn to use my grandfather's oxyacetylene welding torch.

That's the real desire. I desperately want to work on something, buy it cheap and make it better and live well, acquire and practice skills and understandings, and I need a garage for that to happen.

Emphasis on the acquisition of skills and understandings. As much as this is primarily about having something and doing something, this is also about perpetuating something.

I like being able to work on things, to know how they function and how to fix them when something goes wrong. That's a large part of why I've always been more attracted to machinery, in its clear and logical (if often complex) relationship of forces, than something as intangible as, say, computer programming.

Part of being able to restore or build something is to act counter to a number of cultural currents, from unthinking acquisition to willful ignorance of underlying processes to disposability. Part of it is the pure gratification of being able to solve problems and create something tangible and reasonably permanent. Part of it's a movement against the increasing obliqueness and unknowability of modern machines, especially vehicles. It quietly bothers me that I can't check the transmission fluid in the Passat. When a valve in the turbocharger intake system conked out - or its demise was finally registered by the on-board computer, on comes the CEL - it was frustrating to think that I really could not have done anything about it myself, the way that I was able to replace a relay in my old Audi or add fluid to the clutch hydraulics on the 240D.

There's something valuable and meaningful about being able to work with one's hands, especially in a mechanical context. It's a signifier of evolution. And I fear it's being marginalized, or even lost.

I recently picked up a copy of Matthew Crawford's Shop Class As Soulcraft, It's not perfect; he's trying to do entirely too much in about two hundred and fifty pages, and much of what he says could (and should) be explored in two or three separate books. But it is a wonderful dissertation on the significance of spinning wrenches and working in a garage and manual labor in general, and how it isn't accorded the respect it deserves in a society too enamored of money managers.

A serious argument can be made (and probably already has been made more than once) that the ability of Americans to work with and on machinery was a major reason behind our successes in the two World Wars. All those kids off the farms and from greasy machine shops were able to keep airplanes running and fix troubled tanks and all the rest. Today? It's broken, toss it and get a new one. Doesn't help that everyday build quality has tangibly dropped in many cases while complexity has increased exponentially.

So there's a practice that has to be maintained here, like speaking a foreign language or playing a musical instrument. And certain devices lend themselves to this practice much more than others. And that all has to be done sometime, somewhere, somehow.

And so somewhere, somehow, there's a damp patch of concrete flooring and a roof to keep out the rain waiting for me to set down my toolbox and size up some neglected masterpiece-to-be that's just rolled off a truck.